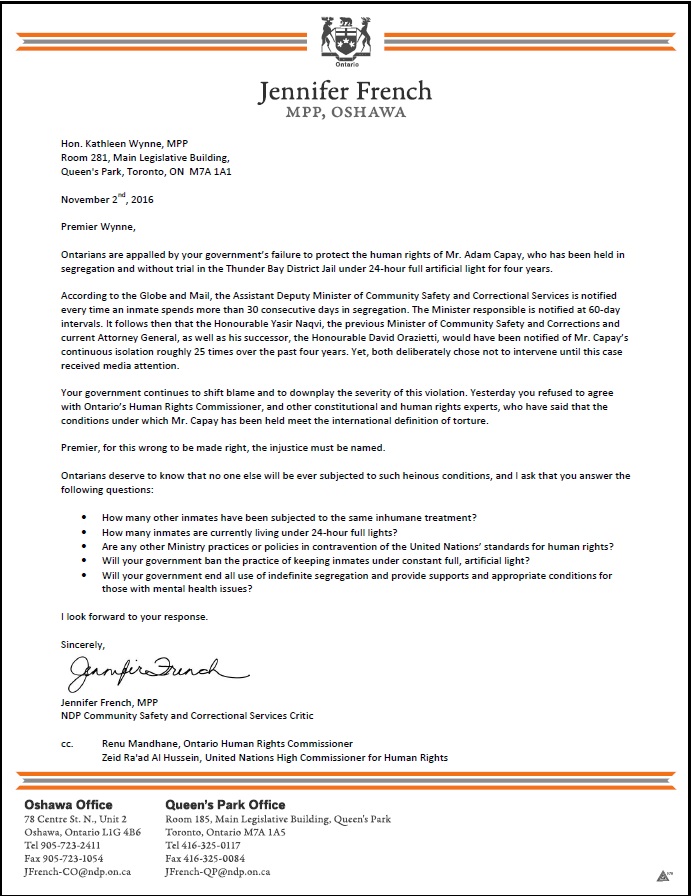 Ontarians are appalled by your government’s failure to protect the human rights of Mr. Adam Capay, who has been held in segregation and without trial in the Thunder Bay District Jail under 24-hour full artificial light for four years.

According to the Globe and Mail, the Assistant Deputy Minister of Community Safety and Correctional Services is notified every time an inmate spends more than 30 consecutive days in segregation. The Minister responsible is notified at 60-day intervals. It follows then that the Honourable Yasir Naqvi, the previous Minister of Community Safety and Corrections and current Attorney General, as well as his successor, the Honourable David Orazietti, would have been notified of Mr. Capay’s continuous isolation roughly 25 times over the past four years. Yet, both deliberately chose not to intervene until this case received media attention.

Your government continues to shift blame and to downplay the severity of this violation. Yesterday you refused to agree with Ontario’s Human Rights Commissioner, and other constitutional and human rights experts, who have said that the conditions under which Mr. Capay has been held meet the international definition of torture.

Premier, for this wrong to be made right, the injustice must be named.

Ontarians deserve to know that no one else will be ever subjected to such heinous conditions, and I ask that you answer the following questions:

I look forward to your response.