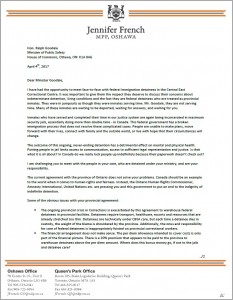 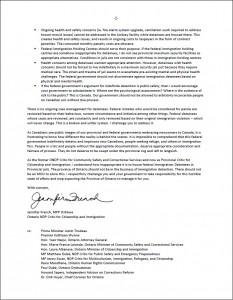 I have had the opportunity to meet face-to-face with federal immigration detainees in the Central East Correctional Centre. It was important to give them the respect they deserve to discuss their concerns about indeterminate detention, living conditions and the fact they are federal detainees who are treated as provincial inmates. They were in jumpsuits as though they were inmates serving time. Mr. Goodale, they are not serving time. Many of these inmates are waiting to be deported, waiting for answers, and waiting for you.

Inmates who have served and completed their time in our justice system are again being incarcerated in maximum security jails, essentially doing more than double time – in Canada. This federal government has a broken immigration process that does not resolve these complicated cases. People are unable to make plans, move forward with their lives, connect with family and the outside world, or live with hope that their circumstances will change.

The outcome of this ongoing, never-ending detention has a detrimental effect on mental and physical health.  Putting people in jail limits access to communication, access to sufficient legal representation and justice. Is that what it is all about? In Canada do we really lock people up indefinitely because their paperwork doesn’t check out?

I am challenging you to meet with the people in your care, who are detained under your ministry, and are your responsibility.

The current agreement with the province of Ontario does not solve your problems. Canada should be an example to the world when it comes to human rights and fairness. Instead, the Ontario Human Rights Commissioner, Amnesty International, United Nations etc. are pressing you and this government to put an end to the indignity of indefinite detention.

Some of the obvious issues with your provincial agreement:

There is no ongoing case management for detainees. Federal inmates who would be considered for parole are reviewed based on their behaviour, current circumstance and initiative among other things. Federal detainees whose cases are reviewed, are constantly and only reviewed based on their original immigration violation – which will never change. This is a broken and unfair system. I challenge you to address it.

As Canadians see public images of our provincial and federal governments embracing newcomers to Canada, it is frustrating to know how different the reality is behind the scenes. It is impossible to comprehend that this federal government indefinitely detains and imprisons new Canadians, people seeking refuge, and others in immigration flux. People in crisis and people without the appropriate documentation, deserve appropriate consideration and fairness of process. They do not deserve to be swept under the provincial rug and left to languish.

As the former ONDP Critic for Community Safety and Correctional Services and now as Provincial Critic for Citizenship and Immigration, I understand how inappropriate it is to house federal Immigration Detainees in Provincial jails. The province of Ontario should not be in the business of immigration detention. There should not be an MOU to allow this. I respectfully challenge you and your government to take responsibility for this horrible state of affairs and stop expecting the Province of Ontario to manage it for you.