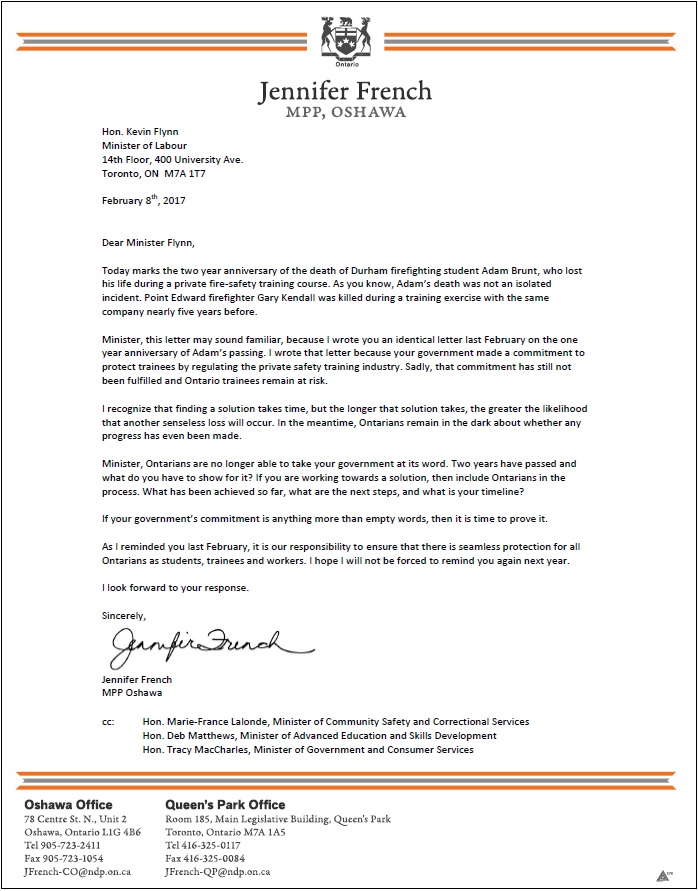 Today marks the two year anniversary of the death of Durham firefighting student Adam Brunt, who lost his life during a private fire-safety training course. As you know, Adam’s death was not an isolated incident. Point Edward firefighter Gary Kendall was killed during a training exercise with the same company nearly five years before.

Minister, this letter may sound familiar, because I wrote you an identical letter last February on the one year anniversary of Adam’s passing. I wrote that letter because your government made a commitment to protect trainees by regulating the private safety training industry. Sadly, that commitment has still not been fulfilled and Ontario trainees remain at risk.

I recognize that finding a solution takes time, but the longer that solution takes, the greater the likelihood that another senseless loss will occur. In the meantime, Ontarians remain in the dark about whether any progress has even been made.

Minister, Ontarians are no longer able to take your government at its word. Two years have passed and what do you have to show for it? If you are working towards a solution, then include Ontarians in the process. What has been achieved so far, what are the next steps, and what is your timeline?

If your government’s commitment is anything more than empty words, then it is time to prove it.

As I reminded you last February, it is our responsibility to ensure that there is seamless protection for all Ontarians as students, trainees and workers. I hope I will not be forced to remind you again next year.

I look forward to your response.